We are pleased to share some of the achievements of our pupils past and present:
Exam Successes: 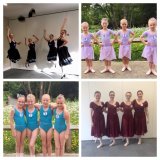 This academic year 2017/18 has again seen outstanding results in both RAD Ballet and ISTD Modern exams.

Congratulations to Camilla Fratamico who is now in full time training at Tring School for the Performing Arts.

graduated from Laine Theatre Arts. She is currently performing in the Mamma Mia! UK Tour. Tilly has performed as a singer/dancer onboard the P&O cruise ship, the Ventura. Previously she has performed in the pantomime Snow White at the New Victoria Theatre in Wimbledon and has toured with "David Hasselhoff Live". She has also toured with the musical Joseph.

is currently dancing with Wayne McGregor's company 'Random'. He attended Tring Park School for the Performing Arts and then went on to perform with Matthew Bourne's Company in the legendary and acclaimed all-male production of Swan Lake. His performances also include appearances with the Michael Clark Company at Tate Modern.

has completed her training at Elmhurst and, following an apprenticeship with the Boston Ballet, she is currently an artist with the London Contemporary Ballet Theatre.

Sophie Lane has graduated from the RAD with BA (Hons) Ballet Education.

Emma Nicholls is studying for the RAD Certificate in Ballet Teaching Studies.

Congratulations to Matilda Thompson and Josephine Nardecchia for achieving a place in English Youth Ballet's 2013 production of Swan Lake. Matilda has since had further success with her auditions for the EYB.
Next
Previous